General Order of Events After Being Arrested

When a person is arrested, there are many things that can occur afterwards. The order of events that take place will vary from state to state, and also depend on various factors of the arrest, including behavior, intoxication, and more. However, in most cases, there is a general list of events you can expect to encounter after being arrested on criminal charges.

Continue reading to learn a general timeline of events that may happen after a person is arrested.

As mentioned, the order of events that take place after a person’s arrest depend on many factors, including state legislation, severity of crimes, good behavior, and more. Aside from all the variables that can influence the order of events after an arrest, there is a general timeline you can use to get a better idea of what you or your loved one can expect.

Order of Events After an Arrest

❶ The defendant is arrested and detained in police custody.

❷ The defendant is transported to the county jail or detention center.

❹ If the acting judge approves, the defendant is given an opportunity to post bail based on a bail schedule of common crimes for the state or county.

❺ If the defendant chooses to post bail, they will be released once they pay the bail amount for their pending criminal charges.

Note: If you choose to not post bail, or you are not granted bail privileges, you will remain in jail until your initial scheduled court arraignment. This could usually happens within the first 48 hours. At the time of your arraignment, the judge will either set bail for you, or release you without bail (also known as “OR”, or “own recognizance”).

❻ To post bail, the defendant can either pay the full bail premium directly to the court/jail, or they can hire a local Indianapolis bail bondsman at a reduced, non-refundable rate.

❼ After contacting a local bail bonds company, the defendant will make all the arrangements with the bail agent, including paying them a non-refundable fee that is a set percentage of their bail premium and signing a legally-binding bail bond agreement.

❽ Once the bail arrangements are made, the defendant simply waits for the bail bondsman to contact the jail and pay your bail premium. After the paperwork goes through, the jail will release the defendant.

❾ If the defendant bailed themselves out of jail, they will be picked up by the bail bondsman and driven directly to the agent’s office to complete all the necessary paperwork and payments.

Note: If the defendant had someone else bail them out, they can be picked up from the jail by their loved one, but both individuals still have to go directly to the agent’s office to finalize all the necessary paperwork.

What To Do If You Are Arrested in Indiana 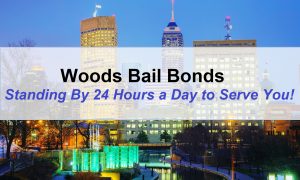 Call Woods Bail Bonds at 317-876-9600 for prompt and professional, 24 hour bail bond services in Indiana. Owner, James Woods, and his team of licensed and insured bail agents, provide 24 hour bail bonds in over 30 Indiana counties. Regardless of time, day, or city, we can get you out of jail fast, and for as low as 8% of your total bond! Request a free estimate, anytime.
This entry was posted in Bail Bonds and tagged 24 hour bail bonds, bail bond timeline, Indianapolis Bail Bondsman, Order of Events After an Arrest, what happens after arrest. Bookmark the permalink.